Here we are at the end of the week, and that means that it’s time for Integration, Part 2!

I’ve spent a good bit of time thinking about this business of synergies and differences between mathematics and computer science and what they might mean for integrated curriculum. (I’m hopeful — please oh please oh please — that soon I’ll be able to point you to a published paper or two about this.) It’s a complex issue full of nuance and I always have a hard time coming up with a clear description or list of what’s the same and what’s different. For a while I thought I had to have a handle on that before I could think about writing an activity that asks kids to wrestle with the ideas.

But then I remembered a key idea that underlies my whole educational philosophy:

What does that mean for a fully integrated math + CS activity? First of all, it means I don’t have to have some definitive list of synergies and differences. Kids will notice things, and talk about them, and they may or may not map directly onto my ideas. And that’s ok, because there isn’t a perfect list.

It also means that I don’t have to generate a problem context that maximizes synergies and reduces differences as much as possible. I saw that as a goal, at first. Too many differences might either distract from the big ideas that lesson is meant to address or lead to confusion in one discipline or the other later on.

But I no longer think that’s true. The point isn’t to minimize differences, but rather to have kids think about them.

Based on this thinking, here’s my new idea for fully integrated activities: Instead of figuring out the best way to address both disciplines at once, we ask kids to translate the language of one discipline into another.

For example, take a common activity that happens throughout elementary mathematics: Counting, adding, and subtracting on a number grid. I’ve written plenty of activities in my career that have kids think about making “jumps” on a number grid. To add 23 to 37, for example, they might jump down two rows to add 2 tens, and jump to the right three spaces to add 3 ones. They land on 60, the sum. 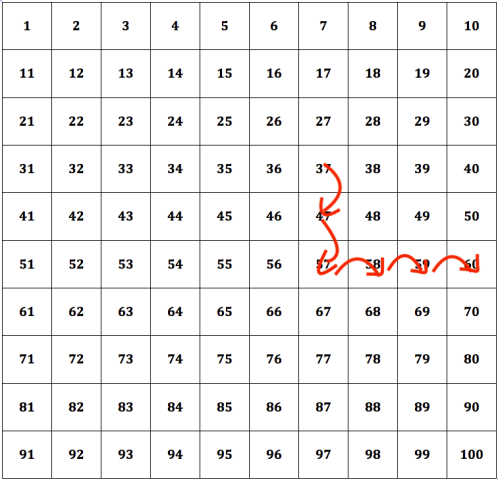 This activity, particularly the visuals associated with it, remind me a lot of the kinds of activities kids do in programming curricula aimed at elementary school. Kids direct on-screen characters and physical robots through pathways by programming them in terms of distance and direction of travel. When I first started thinking about this, it seemed like a superficial connection based on nothing but a common grid-like structure. But more recently I’ve been wondering if the similarities go deeper. In both cases, kids are giving directions to move from one point to another. The difference is in the way of communicating that information.

Is mapping the two kinds of language about directions onto each other something kids could do? I’m not sure, but I think at least upper elementary school students could. Not only that, but I think the kinds of thinking work it would take to translate directions like this:

… could be beneficial to kids. Assuming they start with a printed number grid and illustrate the mathematical directions with their fingers, to change that into spatial directions they’d need to engage in some perspective-taking. To orient themselves and “think like the robot,” much like Papert (1980) advocated using using the Logo turtle as an object to think with.

I think kids might come out of that translation experience with a different way of thinking about the structure of the number grid, and also a foundation for thinking about algorithms that would support other programming activities.

Maybe the “full integration” balance point isn’t about pointing out synergies and differences between disciplines to kids. Maybe it’s about allowing kids to translate their thinking from one to the other.

Kiray, S. A. (2012). A new model for the integration of science and mathematics: The balance model. Energy Education Science and Technology Part B: Social and Educational Studies, 4, 1181-1196.